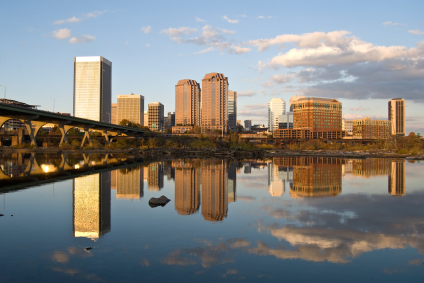 Which city is home to nearly 150 internationally-owned businesses representing 28 countries?

Would it help you guess if we named a few of its sister cities around the world… Zhengzhou, China; Zacatecas, Mexico; Saarpfalz-Kreis, Saarland, Germany; and Windhoek, Namibia? One more hint: William Byrd Park, William Byrd High School, and William Byrd Community House are just a few of the local places named for the city’s founder, Colonel William Byrd II.
The city is Richmond, Virginia.

Steeped in U.S. history, Richmond has been the capital of Virginia since 1780 and was the capital of the Confederacy during the Civil War. Tourists rank Richmond’s historical sites high among its many attractions.

But what attracts businesses to the area? Companies from around the globe operate in Richmond: Koenig Technology of Austria, Gerdau Ameristeel US of Brazil, General Gene of China, General Cigar Company of Denmark, Alstom Power of France, Boehringer Ingelheim Chemicals of Germany, Sabra of Israel, Honda of Japan, and Reynolds Packaging of New Zealand, to name a few. And Germany-based ALDI has just announced plans to open discount grocery stores in the Richmond area in 2014.

According to Greg Wingfield, President of the Greater Richmond Partnership (GRP), there are four reasons why companies come to Richmond:

1) Location at the midpoint of the U.S. East Coast
2) Diversity of business culture
3) Outstanding education infrastructure
4) Quality of place

To hear more about Richmond from Greg Wingfield, click here.

The average commute is 24 minutes, despite the lack of a commuter train.

Overall cost of living is slightly higher than the national average, but housing costs are lower.

For more information on what it is like to live and work in Richmond, Living Abroad’s International Relocation Center recently added Richmond to the list of 177 destinations available. For details on ordering Richmond contact Ed Barnhart, or for a free trial, click below.

What can technology do?
Scroll to top
X