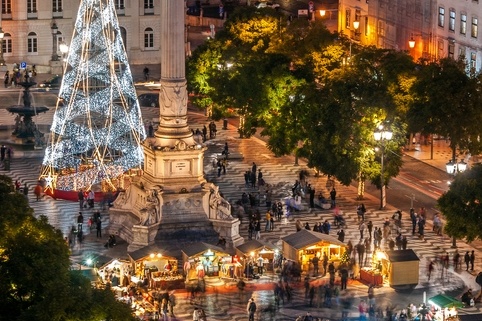 If expats don’t travel back to their home countries, how do they make the best of the holiday season away from home?

Their adopted countries’ holiday traditions may be very different from those back home.  Many expats bring their own personal and cultural traditions with them, and even incorporate some new traditions from their host country.

Four different American correspondents share their holiday experiences from around the world.

Portugal Correspondent, Tricia Pimental and her husband Keith, find the Christmas holiday not too different from the U.S. The season starts on December 8 with the Day of the Immaculate Conception.

“There are Santas, crèches, and tasquinhas, which are stalls selling handmade crafts, wines, cheeses, jams, and jellies,” Tricia says. “Festive lights are everywhere—downtown Lisbon is aglow—and in smaller communities, like where we live, the sounds of Christmas carols are heard through loudspeakers as locals shop and passersby enjoy festivities on the esplanade in the center of town.”

Don Murray and his wife, Diane, who live in Cancun, Mexico, say they celebrate Christmas twice.  However, he notes that it is more relaxed than in the U.S.

“We have our first dinner in a nice restaurant on Christmas Eve. Then, Christmas Day is our time for a homemade turkey dinner, calling friends and family on Skype, binge-watching Netflix, and enjoying some wine.”

Donna Stiteler, a Correspondent in Cuenca, Ecuador, says that she was ready to give up enjoying the holidays in the U.S., but living in Ecuador, life has taken a change for the better given the lower cost of living.

“This is the first time I’ve actually had time to put an effort into decorating. I had sort of given up on enjoying Christmas while living in the States. Fighting over whose house to go to, spending money on presents no one wants, the holiday music that starts at Halloween. Christmas had turned into a chore instead of a celebration.  In Cuenca, I have rediscovered the true meaning of Christmas, and for me now, it’s about stopping to take time to appreciate the things I have.”

Kirsten Raccuia, Southeast Asia Correspondent in Penang, Malaysia believed when she moved there, she would never celebrate a U.S. style Christmas again.

“Malaysia is a multicultural country, so they celebrate all sorts of holidays here, and Christmas is a big one. I’m still shocked to see girls in traditional hijabs, wearing Santa hats, putting up Christmas trees with their Chinese coworkers at a shop. They deck the malls with fake snow and huge Christmas scenes where people line up to pose and take pictures in all the merriment. They play holiday music starting the first day of November and a Chinese Santa walks around in full regalia, never mind that it’s 90° F. Just like home, kids are running up to hug Santa as he belly-laughs and walks around the mall.”

No matter where you find yourself during the holidays, take advantage of the new surroundings and best features of your adopted country and culture. That’s the sign of a successful expat – one who is adaptable and creative!

‘Tis the Season for Shop & Ship

Don’t get stuck this holiday season!
Scroll to top
X