An American recently returned from a business trip to Mexico and reported to his colleagues: “The entire trip was fraught with miscommunications about meetings, deadlines, and even social activities. Start times were clearly stated in advance, but no one ever arrived on time! I wasted so much time having to repeat information for latecomers. Lack of respect for the itinerary, combined with having to continually push scheduled agenda items to a later date, was so frustrating.”

If you have ever traveled to Latin America on business, perhaps you can relate to this frustrated American.

In some cultures, being late is considered rude and can have negative consequences. However, according to the cultural norms of many Latin American countries, arriving late is acceptable. In preparing for a business trip abroad, it can be useful to understand how and why perceptions and attitudes toward time can vary dramatically between cultures.

Complex cultural values drive many behaviors. In many Latin American cultures, the value of relationships is more important than the value of time management. In some cultures, the clock drives the agenda –  to be late for a meeting or exceed the allotted time is considered disrespectful. In other cultures, including most Latin American cultures, the meeting, conversation, or visit takes as much time as needed, regardless of what is on the schedule. Understanding which value is more dominant in a given culture can ensure that you are prepared to adapt. Adaptation requires cultural awareness and understanding, along with the ability to withhold judgment.

Americans are often “low context” communicators. This communication style is direct, precise, and especially reliant on verbal communication. Low-context cultures also focus more intensely on objectives; the message itself means everything. Personal relationships, work, and other aspects of day-to-day life are compartmentalized. Consequently, each time low-context communicators interact with others, they need detailed background information.

However, many Latin American cultures, including those in Mexico, are comprised of “high context” communicators. A high-context listener determines meaning by correctly reading contextual clues such as non-verbal communication, and the status or the age of people involved in the conversation, among other factors. Because members of high-context cultures often have extensive personal relationships with family, friends, colleagues, and clients, they do not require, or expect, much background information.

Building trust and strong relationships are keys to reducing these misunderstandings. Asking questions and paying careful attention to non-verbal cues can bring clarity to communication, and result in greater success during your next presentation with a Latin American audience.

In many cultures, December and January mark a period in which people choose and make resolutions geared toward self-improvement. Here are three resolutions that globally mobile people and their families can make at any time of the year.

Identify what has changed, other than location.

During the excitement and stress of an international assignment, it can be challenging to notice other details that affect day-to-day life. But changes in health, finances, current events, service providers, legislation, technology, academics, and professional life, among others, can have profound effects on assignment success. Noting these changes from time to time can help families to adjust, and to plan.

Merely learning about the business practices of another culture is no longer sufficient for success. Employees who are globally mobile, or even just work in global teams, must learn about visible and invisible aspects of culture. They must also develop awareness of their own cultural preferences, and then work toward flexibility and understanding when speaking and listening to  others. Tools like Living Abroad’s Culture Coach Online provide this level of customized training at an employee’s convenience, anywhere in the world.

Logistics, high expectations, and social obligations can make a blur out of travel to even the most familiar places. At the same time, periodic visits home, especially as the end of an assignment draws near, are important parts of a challenging process that is often overlooked: repatriation. It can be very tempting to see everyone and do everything at home. However, it’s important to develop the habit of thinking of your next destination in favorable and multipurpose ways.

If you wish to use original Moose cartoons in your presentations please contact Michael Cadden. (X. Pat Moose is a copyright (c) of Michael S. Cadden) 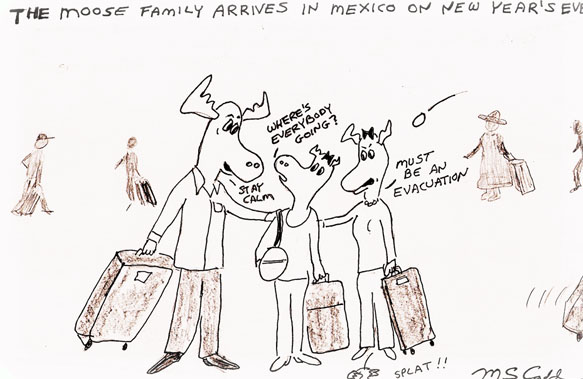 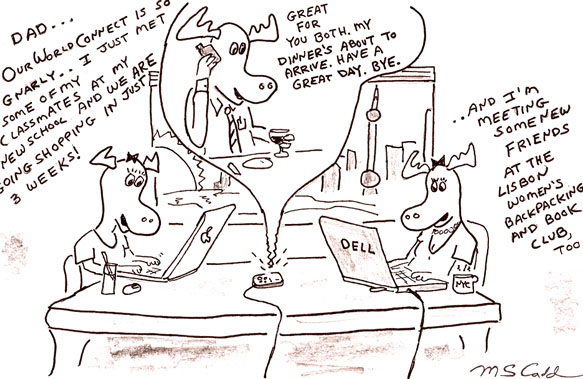 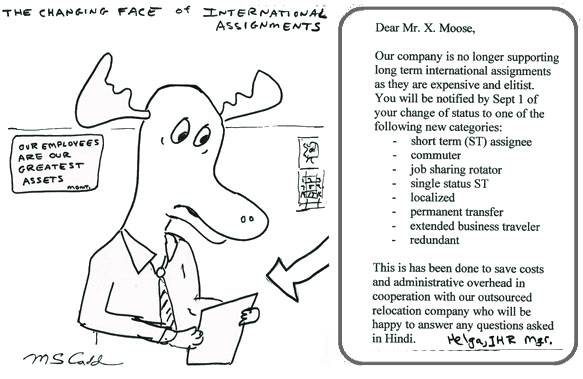 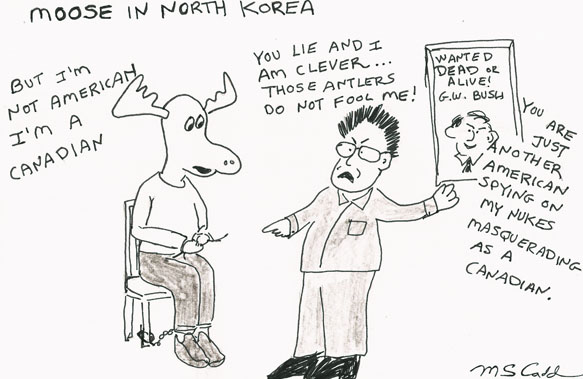 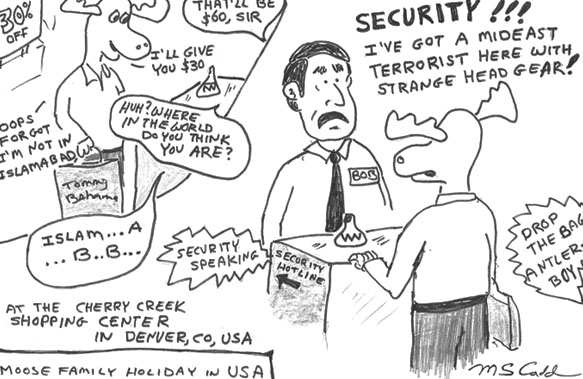